1928 A GLORY year for the LINDSAY COUSINS

TBHS’s first Olympian and a touring All Black

David Powell Lindsay and David Fredrick Lindsay have a special place in sporting history of TBHS. These first cousins were sporting stars in NZ in 1920’s.

David Powell was in the in the ten strong Olympic team that travelled to Amsterdam for the 1928 Olympics. Arthur Porritt was the team captain and Ted Morgan (boxing) would return with NZ’s first Olympic gold medal.

David Fredrick was selected in the 1928 All Black team to travel to South Africa. Such was the strength of 1920’s TBHS rugby he had two fellow Timaru Old Boys along- side him in the All Black touring team; Archie Strang and Ron Stewart.

D P Lindsay (TBHS 1920 -24) had proved himself a skillful boxer, a talented athlete, keen golfer and outstanding swimmer at school. It was in the pool that he would ultimately excel.

At TBHS athletic sports in 1924 D P Lindsay broke the senior mile record with a time of 4m 55.6sec. This performance would not have gone unnoticed by 3rd former J E Lovelock. Four years later Lovelock would clip 15 sec off Lindsay’s record run.

In 1924 D P Lindsay was the winner of the Teschemaker Cup. The Old Boys ‘ Association had determined that Teschemaker Cup be allotted to a cross country run. There were 24 starters current students along with old boys. The Cup was awarded to the athlete with the fastest time. Lindsay’s athletic prowess gained him his first Teschemaker Cup he was awarded the Cup again in 1934 for his national standing as a swimmer.

While still at school he won his first NZ swim title over 220yards. In each of the years

He was selected as one of four swimmers in the 1928 Olympic team for the Amsterdam. He finished 3rd in his 400m freestyle heat, it was not enough to advance. Over 1500m he placed 4th in the 2nd heat he did not qualify for the final.

On the six month trip to the Games he did have success. He won the English one mile swimming championship and was second in the 800m at the Tailteann Games in Dublin

D P Lindsay became a teacher, graduating from Canterbury College with a BA in 1933. He held teaching positions at Cathedral Grammar, Christchurch and Dilworth School, Auckland. At the outbreak of WWII he was teaching at Dannevirke High School. After three years home service Lieutenant Lindsay joined the war effort in the Middle East.

On 12 September 1943 he and seven others were killed when one of the Allied bombs fell short of the target. His grave is in the Sangro River War Cemetery, Abruzzo, Italy.

He was survived by his wife Mae and sons, Michael & Neil who lived in Gisborne at that time. WE REMEMBER HIM

D F Lindsay (TBHS 1922-25) was born in Studholme in 1906. He attended Waimate High School and spent his last four years at TBHS. Like his cousin he was a fine all round sportsman and capable scholar. D F Lindsay was the runner up in the senior athletics championship of 1925, with victories in hurdles, long jump and shot put. He was the senior boxing champion in his final year winning Dr Little’s Cup! In the 1st XI cricket side he was a middle order batsman and more than useful bowler.His rugby talents were to the fore throughout his time at TBHS. He played his early rugby as a five-eight and showed great tactical skills, kicked well and was a fine defensive player.

His cousin D P Lindsay went north to Canterbury for university study while David F went south to Otago University. D F continued his academic focus and was able to maintain his sporting interests. He boxed, ran and threw in university competitions as well as playing cricket for the Albion club. Residing at Knox College he initiated the first Dunedin THSOB Dinner in October 1926.

He made an impact in Otago rugby. In the ODT in 1927 an astute rugby observer commented “He can play fullback, centre, wing or first-five eight… He is a mighty kick – from both the field and at goal. [He] uses his weight in running, can tackle anything, and is improving all the time in his passing game.”

Lindsay missed the 1927 North vs South match, he was hospitalized with measles. Such was his prior form that he was an early selection for the tour to South Africa in 1928.

Lindsay was selected as a threequarter for the All Blacks but played all but one of his 14 games at fullback. He played the first three tests missing the final test because of a shoulder injury. He was the leading points scorer with 63pts on the 1928 tour. One sportswriter named Lindsay the man of the match in the first test ( lost 0 -17 by New Zealand) because of the work he was required to do and described his display as “complete and without blemish in all respects.” [ The test series was tied 2–2 all]. The shoulder injury restricted his appearances over the following season though he did represent Otago again in 1930, including the match against Great Britain. He retired after a few club matches the following year.

Graduating from Dental School he worked in Timaru and Invercargill. David F Lindsay was a South Canterbury rugby selector in the late 1940’s. He became the Timaru Hospital dental surgeon in the decades that followed. David Frederick Lindsay died 7 March !978.

The accommodation wing opened in 2005 at Thomas House was named the LINDSAY WING in recognition of the two outstanding Old Boy cousins. 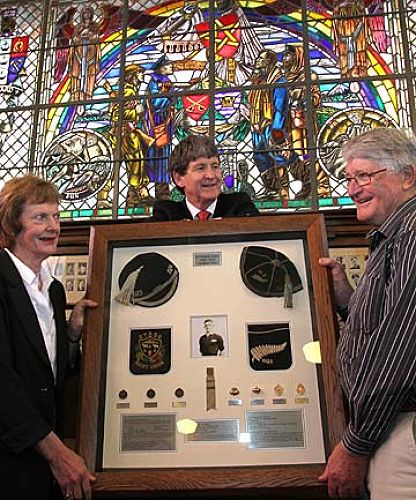