P S (Sid) Q Cabot was the first THSOld Boy All Black. He played against New South Wales in a test match in 1921.

Yet he was just one of three brothers to represent NZ and wear the Silver Fern. The brothers all attended Timaru Boys’ High School and went on to achieve sporting and professional success. The Cabot brothers were well recognized in sporting circles in New Zealand in the 1920’s and 1930’s.

Sid, the eldest, attended TBHS 1914 -18 and was member of the teaching staff 1919 -20. He made his name in rugby representing South Canterbury, Otago and touring with the NZ Universities. A fine game for Otago against the Springboks touring side saw his call up to play for New Zealand against New South Wales as a wing forward. He was informed of his selection by fellow student, Arthur Porritt. [Porritt was the 100m bronze medalist at the 1924 Olympics and in the 1980’s NZ Governor General}

It was his sole All Black appearance. New Zealand lost to NSW 17 – 0. Cabot, gained favourable mention in match reports though he went off injured in the second half. A genuine if very short All Black tenure.

He made an impact beyond the sports field. He was a fine scholar and student leader. Sid Cabot was awarded a Scholarship to study overseas and went on to gain a Doctorate at Harvard University. His specialty study was personality development of adolescents. He became an international authority on the behaviour of pre-delinquent children.

He married in the US in 1932 and continued to make his mark as a consultant psychologist. In 1948 moved to the UK and founded P S Cabot & Co Ltd, a management consultant firm. He was made a Freeman of the City of London in 1968 in recognition of his life’s work. He never lost his connection with TBHS and it was appropriate that on a visit to the UK in 1992 Bruce and Margaret Leadley were able arrange with the Cabot family in Totnes, Devon for much of Sid’s sporting memorabilia to come back to his old school. This included Otago, NZ University and All Black jerseys and caps. These can be viewed at the school today. Sid’s health declined in later years. When he died in 1998, age 98, he had been the oldest living All Black.

Garnet S Cabot was four years younger than his brother Sid. He was a boarder at TBHS for four years immediately after WW 1. The family lived at Salisbury, just south of Timaru, though appeared to reside in Dunedin while the boys were at University.

Garnet was to be the most successful athlete in the family. He was a capable runner but it was as a race walker that he would achieve International success. For almost a decade he

was the premier race walker in NZ. He won NZ titles over half mile, mile and three miles, commencing in 1926 and his final title in 1931. Such was his reputation that he undertook exhibition race walks. In 1930 he did one such walk at the Timaru Caledonian Sports on New Years Day. Garnet wore the Silver Fern representing New Zealand both in Australia and here at home.

Garnet had completed a Surveying degree at Otago University and following overseas travel settled in Australia as a mining engineering in Australia. He died in Victoria in 1968.

Reginald H Cabot wasthe youngest of the three brothers.He began at TBHS in 1921. All three Cabot’s were at the school that year. Sid was teaching, Garnet in the fifth form and Reg in his first year. Like his brothers, Reg was drawn to sporting competition. At University, Reg competed in harriers and like his brother was drawn to race walking. In both provincial and national race walking competition the brothers regularly finished first and second. Garnet was the superior competitor but Reg was good enough to win National honours. Both Garnet and Reg were named in the New Zealand team for the Australasian Championships in December 1927. He remained a competitive race walker for over a decade. Reg was recognised as capable sports leader and organiser.

In June 1931 Reg, on behalf of the Otago University athletics , made the presentation of

‘ a solid leather attache case’ to J E Lovelock prior to his departure to England to take up his Rhodes Scholarship. Reg was the following year on record as Otago Branch president of the THSOBA.

Reg moved to the North Island in the mid 1930’s and eventually settled in the Hawkes Bay where he maintained a lifelong interest in sport. He became a noted athletic administrator in the Bay and officiated at the 1950 Empire Games in Auckland as a track inspector. He engaged in a wide range of sports and was recognized as a good all rounder on the court or green. 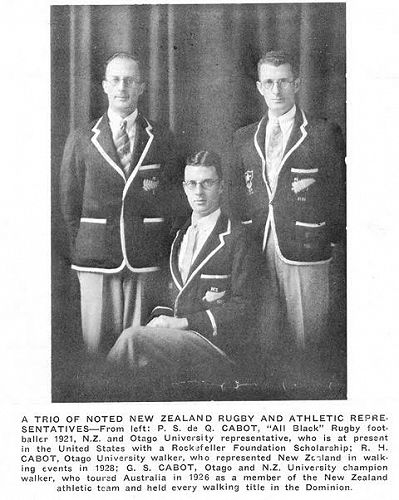