Kia ora everyone. The year is nearly over and what a year it has been. The vast majority of us at school got Covid-19 in the first and second terms. Some of us adults got hit fairly hard by it, but the boys seemed barely affected by it - I’m guessing that most of the small group of boys that say they didn’t get Covid probably did, but didn’t know it. Oh to be that young and vigorous again!

The Rectory field development is complete. It is now flat and green and it is going to be such a wonderful asset for us in the coming years. Thanks so much to the Old Boys’ Foundation for the generous grant of $100,000 that got this ‘once in a generation’ project over the line. We now have a fantastic sports and recreation space with state of the art drainage and irrigation - no more pooling, bare patches and flooding! I can’t wait to see our cricketers playing on the newly installed wicket and our footballers running out for their first home game next year.

It was an amazing year of sport.

● Cricket made it to the top tier of the Christchurch Metro College A grade and did well.

● Rowing had an outstanding Maadi Cup, winning a load of medals with a small squad.

● The Football 1st XI won their Senior South Canterbury Competition for the very first time. They then went to Napier for the National Tournament seeded 32nd but they actually finished in 20th place by producing some great performances.

● Our Hockey 1st XI finished second in the Christchurch Metro Secondary Schools’ Competition. They went to North Harbour for the National Tournament with a real chance of a top finish but were pipped in extra time by St Andrews in the quarter final. If they had won the STAC game, they probably would have made the final.

● Our Basketball Senior A's won their South Canterbury Premier Men’s competition. One notable victory was their inter-school against Waitaki. Over the last few years, Waitaki has had the edge on us in Basketball, so it was good to see that unusual anomaly put right!.

● The Rugby 1st XV had another really good year. They finished 6th in the Crusaders Region competition with some notable wins: they beat the eventual champions, Nelson College, in Timaru; they buried Christ’s College in the mud of School Park; they beat Otago Boys’ for the first time in a number of years; and they won the Waitaki game with relative ease. We were hard to beat at school park. Four boys were selected in the Crusaders wider training squad - Jackson Ross, Zac Parkin, Ned Milne and Cale Tairoa.

● I have only described some of the highlights of our elite performers. Of course, there were many, many other boys just playing for the camaraderie and sheer joy of taking part in sport.

Thanks to you all for your continuing support of this great school. And it is still very much ‘your’ school. Feel free to drop in any time - someone will be available to open up the Memorial Library or show you around Thomas House. If you want to get together and make a day of it, let us know and we will do our best to accommodate you. We love catching up with our old boys. Scientia Potestas Est. 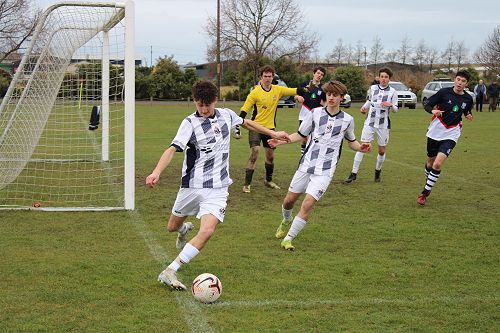